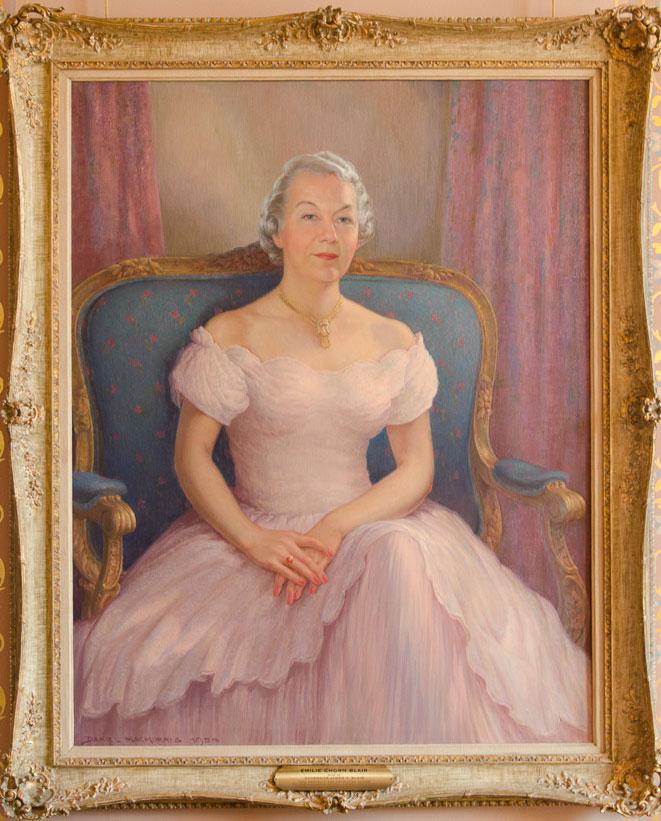 During this period of the Mansion's history, many routine repairs to its structure had been neglected. The windows leaked air, the heating system was inadequate, and Governor Blair called the stairway, cardiac hill. These conditions, no doubt, were a factor in the Blair's initial decision not to live in the Mansion, but to live instead in their home in east Jefferson City. Nevertheless, Governor Blair promoted the installation of an elevator and many other repairs and renovations to the building. Then they returned to live in the Mansion. Before completing this portrait, the artist painted a ruby star sapphire ring on Mrs. Blair's right hand, which adds a touch of color and balance to the whole composition. Governor Blair approved of the artist's choice so much that he had an actual copy of the ring made for Mrs. Blair. Due to an earlier arm injury Mrs. Blair stood in the inaugural reception line holding a bouquet of flowers to avoid pain that came from shaking hands. They had two children, James T. III, who, as an adult, was the first Governor's son to be married in the Mansion, and Mary Margaret. Governor Blair started the Academy of Squires, who established it to honor Missourians for their accomplishments at all levels, community, state or nation. Tragedy struck the Blairs on July 12, 1962. Blair and his wife died together in their Jefferson City home due to carbon monoxide poisoning. Investigators theorized the home's central air conditioning system drew in the exhaust fumes from a vehicle accidentally left running in the garage. Governor Blair and his wife are buried in the Riverview Cemetery in Jefferson City.