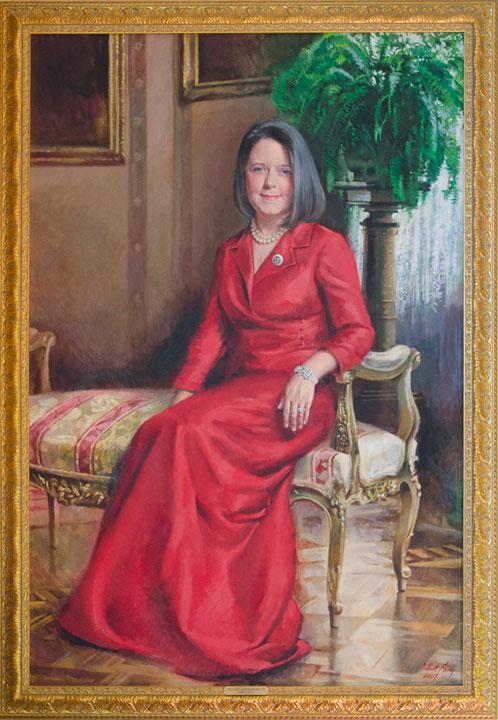 Mrs. Blunt was also one of the youngest First Ladies of Missouri. Her efforts included successfully lobbying the Missouri General Assembly for $3.1 million in funding as well as hosting the First Ladies Luncheon. This was the first ever event bringing together Missouri's First Ladies for a common cause. Her charitable efforts included serving as the 2007-08 honorary chair of Missouri Citizens for the Arts. She also took active leadership in Habitat for Humanity and Susan G. Komen Race for the Cure. Governor and Mrs. Blunt resided in Springfield, Missouri prior to his election. They have two children: their first son, William Branch Blunt, was born in March 2005, two months after his father took office as Governor; and a second son, Brooks Anderson Blunt, was born on January 1, 2010. Mrs. Blunt chose to sit for her portrait on the same Victorian bench as Mrs. Stark. She felt a connection with Mrs. Stark as they both were expecting a child while they lived in the Mansion. In addition, they both married men who served in the U.S. Navy. When Governor and Mrs. Blunt moved into the Mansion, the conditions were much like times during the Blair administration, when major structural repairs were needed like the windows and roof. Mrs. Blunt partnered with MMP to launch a statewide press tour featuring the need for funding. Additionally, they raised over $250,000 in private funds to restore the second floor living quarters and guest rooms.