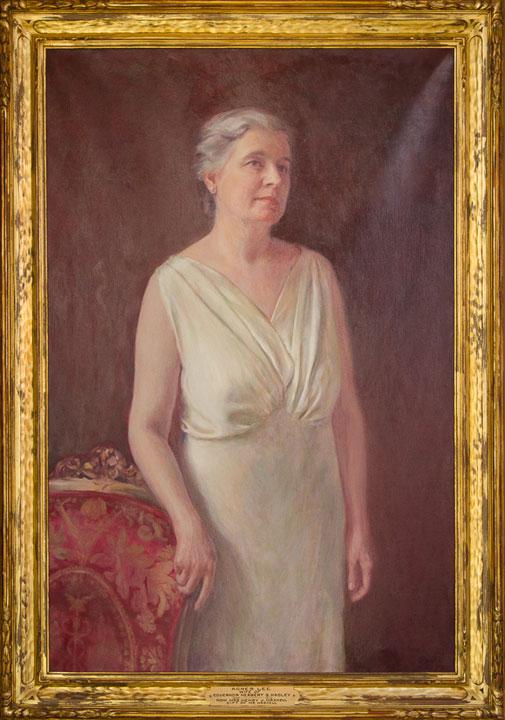 Too much handshaking on inaugural day caused Mrs. Hadley's hands to bleed, and her satin-trimmed inaugural gown was covered in blood drippings. She later revealed that she had learned a trick to avoid this problem in the future. I learned afterward that there is a trick in shaking hands: grip quickly, and first, the hand offered you. If you learn how, you can shake hands with any number of people, shared Mrs. Hadley. The Hadleys were living in the Mansion in 1911 when lightning struck the Capitol building causing a destructive fire. The First Lady and the nanny swaddled the three children in blankets as they watched in horror from the northwest windows. She was one of the youngest First Ladies. She waited until she was in her 60s to have her portrait painted. Governor and Mrs. Hadley resided in Kansas City prior to his election. They had three children: John Lee, Henrietta, and Herbert. They were friends with Presidents William Howard Taft and Theodore Roosevelt. Later Governor Hadley returned to St. Louis to be chancellor of Washington University. After the Governor's death, Mrs. Hadley married Henry J. Haskell, editor of the Kansas City Star. Her daybooks were given to University of Missouri in 1973 by her daughter, Mrs. Warren B. Lammert. Mrs. Hadley Haskell was a reporter and member of the Board of Curators at the University. Governor and Mrs. Hadley are buried in Riverview Cemetery in Jefferson City.