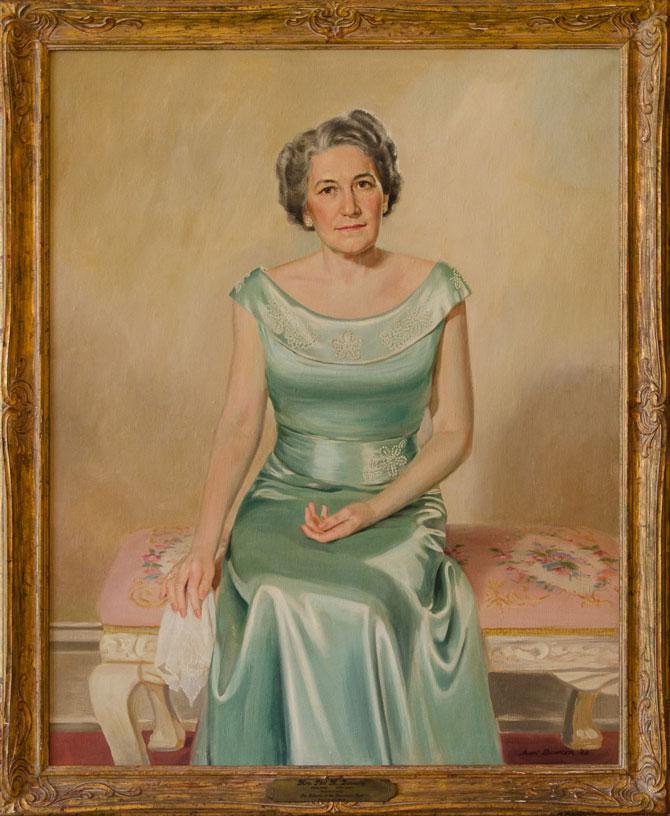 Mrs. Donnelly is shown wearing a light green gown with pearl embellishments. Governor Donnelly's first term was during WWII, and Mrs. Donnelly's gown in this portrait reflects the restraint of those times when many commercial goods were rationed due to the war effort. A friend of Mrs. Donnelly's sewed the dress, and Mrs. Donnelly herself applied the pearl embellishments. She is holding a handkerchief with an embroidered 'D' on it. When Mr. Donnelly was again elected Governor in 1953, the times were again prosperous, and a photograph from their second Inaugural Ball shows Mrs. Donnelly in a fashionable gown from that era. Mrs. Donnelly loved gardening, and her efforts began what was later to become the Carnahan Memorial Gardens, which are located between the Mansion and the Capitol. She also opened the Mansion for tours, admitted only by appointment. Mrs. Donnelly used prints from Elenora Park's book, 'Women of the Mansion,' to reproduce 15 of the portraits of the state's earliest First Ladies, have them framed in walnut frames made at the penitentiary, and place them under the staircase in the Nook. In 1954, Governor Donnelly vetoed the bill that would ??have demolished the Missouri Mansion to allow room for a parking lot to be constructed on the site. Keeping a building of this size and of this age in good repair is very expensive, but what a loss to the State of Missouri and its citizens it would have been if the legislators solution to the building's run-down state had been allowed to prevail. Governor Donnelly was the first Governor from Southern Missouri in fifty years, and also the first to serve two terms because Missouri's constitution had been updated and changed. Governor and Mrs. Donnelly were from Lebanon, Missouri, and had one child, David, who was married during the Governor's second term. Governor Donnelly gave the nominating speech for Harry S Truman in 1948.