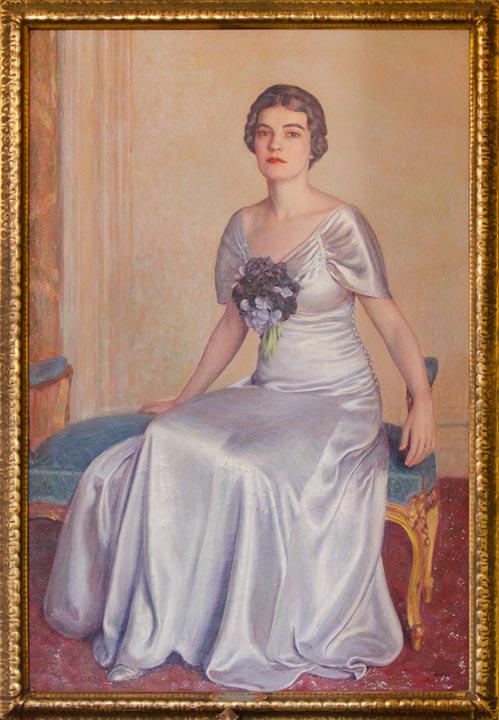 Mrs. Stark is seated on a Victorian bench in a satin gown on the same bench that Mrs. Blunt posed for her portrait. She was a student of landscape architecture and gardening when she met the future governor at a dinner party. This gentleman was the head of Stark Brothers Nursery in Louisiana, Missouri. Even today, if you are driving up in northeast Missouri, you can see advertisements for Stark Brothers Nursery painted on the roofs and sides of barns with the slogan and a silhouette of a bear: 'Stark Trees Bear Fruit.' During the Stark administration, major renovations took place. Among some of the changes were the following: the kitchen wing replaced the porte cochere (a car port that allowed carriages to stop underneath to load and unload passengers); a three-car garage was built into the space under the kitchen wing; the walnut floors without the current, inlaid designs were added; the Newel Post figure came down from the staircase in the Great Hall; the columns in the Nook area were added to buttress the second floor and staircase; and thousands of trees and shrubs, a rose garden, and a retaining wall banked with flowers of the season were all added to the landscaping. The exterior of the Mansion itself, which was usually freshly painted red in the spring, was painted white for the first time during the Stark administration. The term, Stark White, was used informally to describe the new look of the exterior. At the inaugural ball, Mrs. Stark chose to wear the gown she had worn on her wedding day nearly six years earlier. The Governor had two grown sons and two grandchildren from his previous marriage. His first wife had died seven years earlier. The Governor and the second Mrs. Stark had three children: Molly, Kaffie, and an infant who lived only 11 days. The infant was the first baby to be born to a governor's wife while serving in the Mansion. Governor Stark's family started Stark Nursery and introduced Delicious apples to the world. Governor and Mrs. Stark resided in Louisiana, Missouri, prior to his election.