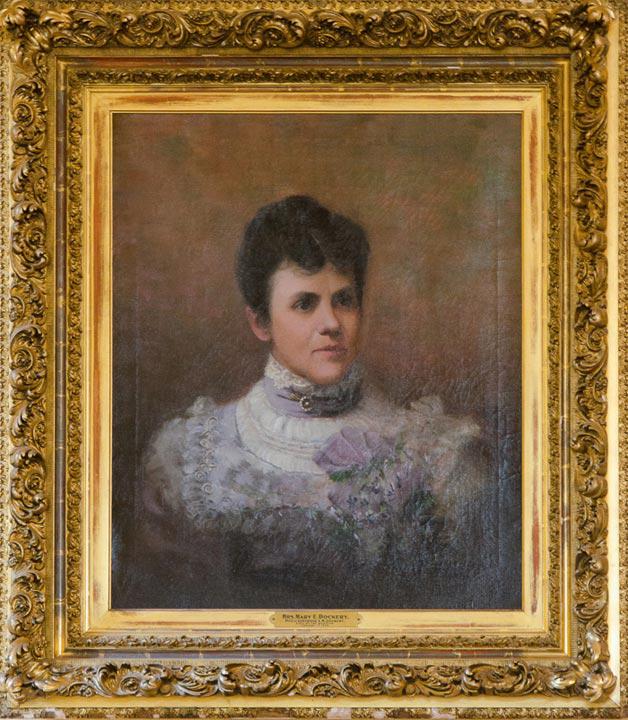 Mrs. Dockery's portrait hangs at the upper left of this west wall. Before becoming Governor of Missouri, Mr. Dockery, from Gallatin, had been a member of the United States House of Representatives. Mrs. Dockery was said to have had a mind like a man's because she read newspapers avidly and helped her husband keep up with the affairs of State while they were in Washington. She was in her early 50s when Mr. Dockery was elected Governor. By this time, she had to curtail some of the social activities that she enjoyed because of a worsening heart condition. None of her eight children lived beyond the age of two years, and she was the first and only First Lady to die in the Mansion. She died on New Year's Day, 1903, when the Mansion was decorated for a military ball that was to take place that evening. After Mrs. Dockery's death, Governor Dockery asked his executive secretary's wife, Kate Morrow, for help. Mrs. Morrow promoted the addition of a porte cochere and door for guests on the south side of the house. Guests could then take the back staircase to the second and third floors and then make an entrance down the Grand Stairway. Kate Morrow also helped co-write 'Women of the Mansion' with Elenora Park. Governor Dockery was a medical doctor before giving up his practice for a political career. Mrs. Dockery preferred to have her official portrait in everyday attire rather than an extravagant ball gown. Interesting Note: Mrs. Dockery's death at the Mansion in 1903 during the holiday season was the third one to occur. Governor Marmaduke died in 1887, three days after Christmas, and in 1882, Carrie, the nine-year-old daughter of Governor and Mrs. Crittenden, died of diphtheria five days before Christmas.