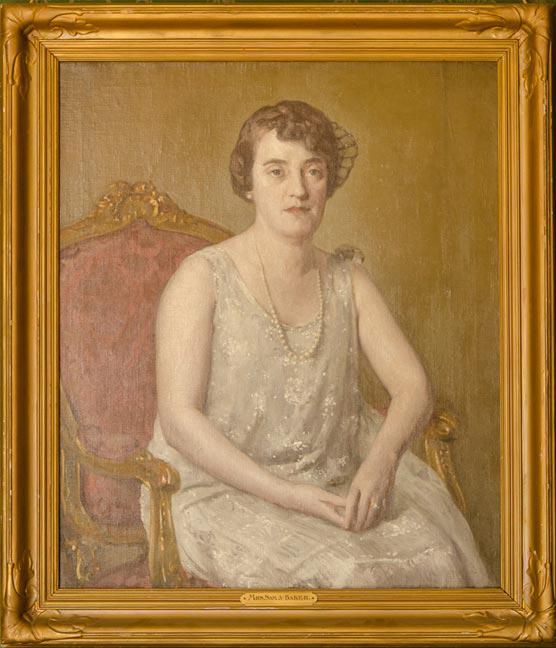 As one enters the Library, the first portrait on the right is that of Nelle Baker, wife of Governor Sam A. Baker. Nelle was perhaps more at home initially in her role as First Lady of Missouri since she had grown up in Jefferson City. She was a bold at her husband's inauguration as in keeping with the trend toward rising hemlines, Mrs. Baker wore a fashionable rhinestone- encrusted evening gown that exposed her ankles. Also for the first time in the state's history, Missourians heard the inaugural address across the airwaves, with an estimated 75,000 people tuning in on home radios. Before the Bakers left the Mansion at the end of the Governor's term, Nelle, with the help of her daughter, Mary Elizabeth, welcomed Mrs. Caulfield with a party since Mrs. Caulfield was new to the city. According to tradition, the parting Governor and his wife leave a gift to the Mansion. Instead of leaving a gift to the Mansion, the Baker's constituents donated 5,000 acres of land in Wayne County to the State of Missouri. This land is now known as Sam A. Baker State Park. He is the only Missouri Governor to have a state park named after him. Governor and Mrs. Baker resided and were natives of Jefferson City prior to his election. He held positions of teaching, principal, and superintendent positions statewide, including principal in the cities of Jefferson City and Joplin, as well as state superintendent for Missouri. They had one child, Mary Elizabeth. During the Baker administration, Charles Lindbergh Jr. made his first solo nonstop flight.