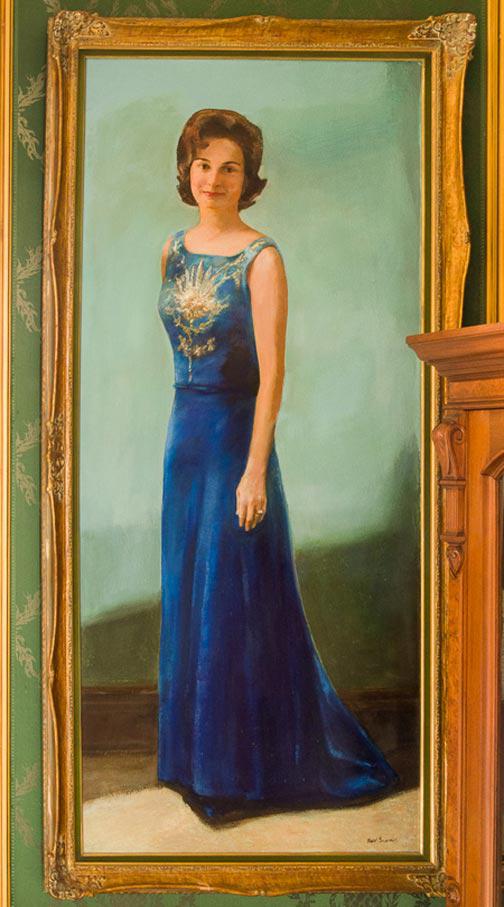 In 2012, Mrs. Hearnes exchanged her portrait for an earlier one. This traditional portrait that is on the wall of the Library was painted during their first term in office and formerly was on display in her hometown, Charleston, Missouri. The photographic portrait from their second term in office is now featured at the Charleston Museum. The Hearnes gifted many of the Victorian oil lamps that sit on some of the tables to the Mansion. Governor and Mrs. Hearnes had an intense interest in the preservation and renovation of the Mansion. Many stories exist about their efforts. For instance, they promoted a project to remove 35 coats of paint from the exterior of the building. For many years, trains from the tracks below would belch soot into the air. This soot clung to the bricks, making the exterior look quite soiled. The solution was to give the building a fresh coat of paint every spring. After many years, even though the paint needed to be cleaned off the bricks, the technology did not exist that would allow this to be done without damaging the bricks; however, by the time the Hearnes lived in the Mansion, the technology was available. Betty herself dragged a hose around the grounds to rinse the landscaping plants every night after the workmen left to be sure that the chemicals would not harm the plants. Betty also discovered the original interior window shutters that had been hidden within the walls and painted over. Mrs. Hearnes worked with the legislature to craft and pass a bill that made Missouri the second state in the union to establish and fund a State Arts Council; the bill was named,  Betty's Bill. Betty sings beautifully and can rival most stand-up comedians when giving a speech. Governor and Mrs. Hearnes resided and were natives of Charleston, Missouri, prior to his election. They had three children; Lynn Hearnes, Leigh Hammond, and Julie Sindelar. The grandchildren are Clayton and Catherine Hammond and Britten and Andrew Sindelar. Governor Hearnes was the first governor to serve two consecutive terms. He died in 2009.