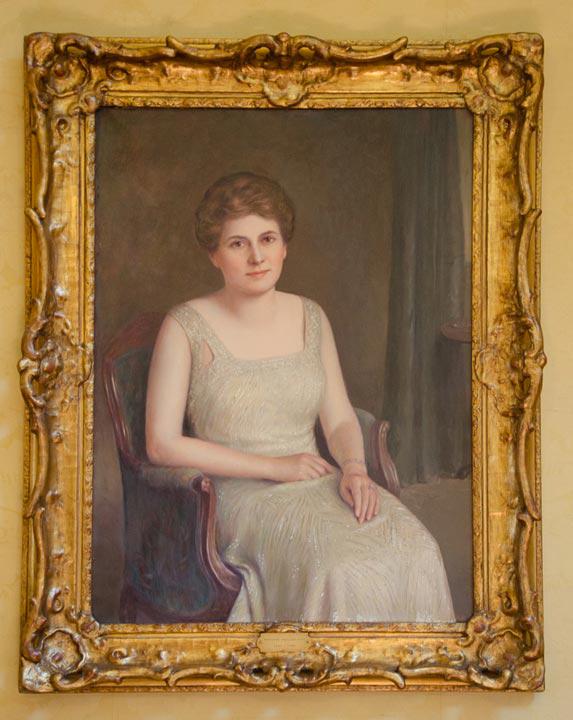 On August 18, 1920, the 19th Amendment to the U.S. Constitution was ratified by the States, which gave women the right to vote. In the 1920 election, both President Harding and Governor Hyde received a large number of women's votes. Governor Hyde later signed a Missouri constitutional amendment that allowed women to hold public office. The present day Capitol was dedicated during Governor Hyde's term. Mrs. Hyde was an ambitious decorator who added the new Steinway piano and a Victrola. In addition, when she had old upholstery removed from some chairs in the Mansion, she knew why they had looked so familiar to her. Stamped on white canvas were the words, Bought for the Missouri Building, St. Louis Exposition, 1904. She was surprised and delighted to learn that those very chairs had been salvaged from a fire that had damaged Missouri's World's Fair building, and they were some of the same ones that she had admired while visiting the exposition on her honeymoon seventeen years earlier. A St. Louis art dealer searched and found the rest of the set, two armchairs and four side chairs, which he purchased for her for $1500. The World's Fair Chairs, as they are called here in the Mansion, are at present upstairs in the Ballroom. Two delays prevented this portrait being finished in a timely manner. First, the chosen artist died before he could finish, and then a car accident caused another seven-year delay. After these misfortunes, Mrs. Hyde's advice was to preserve a likeness of oneself when younger. Governor and Mrs. Hyde lived in Princeton and Trenton, Missouri, before his election. Mrs. Hyde had a bout of poor health during her first two years in the Mansion. They had one child, Caroline, who was playing on the back porch when a big ball of fire struck the window. The impact of the lightning shattered the porch lights and threw the child across the room. Fortunately, Caroline was not injured, but the incident served as a reminder that new wiring was urgently needed.