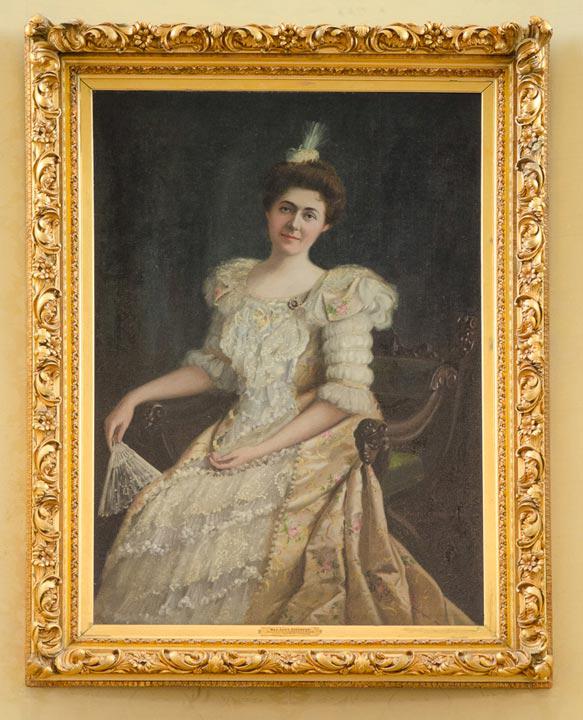 Maggie Stephens began what would become a tradition among First Ladies, that of sitting for a portrait that would be placed in the Missouri Mansion. She requested that the artist paint her in a combination of two favorite gowns: the bodice was from her 20th wedding anniversary gown and the skirt from her inauguration gown. She and her husband had no children, but she adored parties. The Stephens’s probably held the record for the number of parties they hosted while residents of the Mansion. Some of these were theme parties that required guests to come costumed. Outside, Mrs. Stephens added a fountain and electric lights. In the evening, she and the Governor could be seen riding their bicycles along the driveway. During Governor Stephen’s term, the legislature voted to keep the Capitol in Jefferson City. Sedalia had vied for this position for many years because it was on the train line across Missouri. Prior to becoming Governor, Mr. Stephens served as Missouri Secretary of State. While the Stephens’ were in Jefferson City at this time, they owned the residence that still stands on East Avenue. The house is known as the "Ivy Terrace." Governor and Mrs. Stephens resided in Boonville, Missouri, prior to his election to Governor. The apsidal shape of the Mansion’s footprint can be seen, in the Great Hall where Mrs. Stephens’s portrait hangs, and then again across the Great Hall into the Double Parlor. They did not have children but were devoted to their nieces and nephews. She kept a diary which was published in the St. Louis Post-Dispatch. She loved stylish head wear, which at the turn of the century, were hats piled high with ostrich plumes, parrot feathers, and stuffed birds. She loved small dogs and took them with her everywhere, carrying them in a pocket or purse or even draping one about her shoulders as a neckpiece. After Governor Stephens death, she moved to Florida and married Johnny Johnson. She was 69 and he was 29 years old.