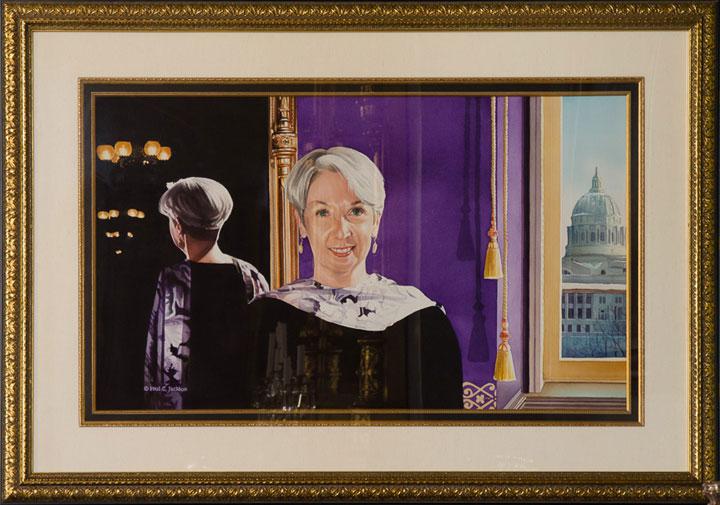 Paul Jackson's watercolor portrait of Mrs. Wilson is the only watercolor portrait in the Mansion. Jackson's compositions often creatively rearrange objects from life into a pleasing composition, and he has done this with this portrait as well, since no view of the Capitol from the Mansion conforms to the view in the portrait. Jackson's compositions also often feature glass and mirrors. In this portrait we see Mrs. Wilson looking forward although part of her image remains behind in the mirror. Since her husband was the Lieutenant Governor at the time of the tragic plane crash that took the life of Governor Carnahan, the Wilson family could not look back and they automatically became the First Family. One could interpret the mirror as reflecting this truth of Mrs. Wilson's life. In the portrait, her children's names, Erin and Drew, can be found in the tassels; a four- leaf clover in honor of her Irish heritage is in the wallpaper; a bee on the mirror frame is in honor of her mother, Bee; and mirrored backwards on the light globes is Wilson's lucky number 23. Her husband proposed on the 23rd, and they were married at 2:30 on June 23. Also notice there is snow on the Capitol because they were at the Mansion during Christmas. Both the Wilsons and Paul Jackson live in Columbia, Missouri. If you stand to the left of the portrait, you can also see the reflection of the dining room chandelier. Governor and Mrs. Wilson attended Columbia Public Schools, were teachers and returned to Columbia after his term.