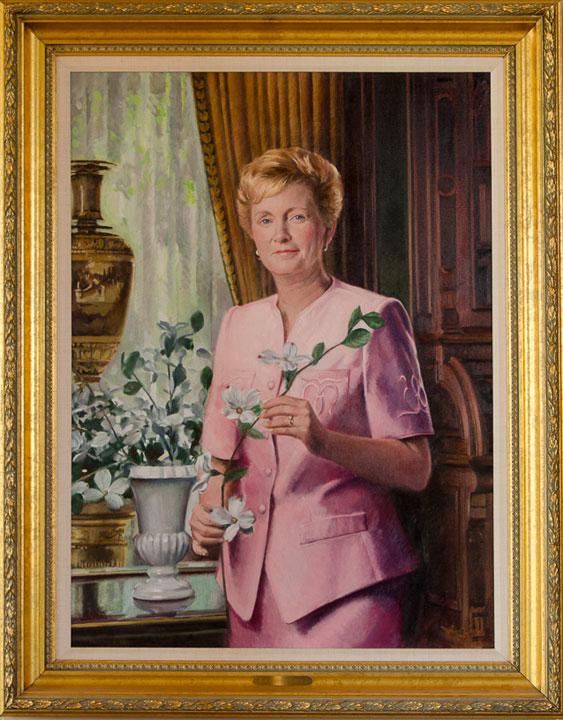 For her portrait, Mrs. Carnahan chose to honor working women by being pictured in professional dress such as a working woman might wear. This choice not only reflects the thinking of Mrs. Carnahan, it reflects her place in time in Missouri's history. The U.S. Constitution did not provide suffrage for women until 1920, and women did not routinely work outside the home until after WWII. Mrs. Carnahan also chose to hold a flowering branch of Missouri's State Tree, the dogwood. During the Carnahan administration, the Mansion continued to be a popular venue for the citizens of Missouri--especially for children. Mrs. Carnahan began the  Spooktacular  Halloween event which brought elaborate autumn decorations and scary scenes with the Governor himself dressed as Dracula, appearing from the front second story window.  Children's Hour at the Mansion  and the Easter Egg Hunt were also successful children's programs. Mrs. Carnahan continued efforts to enhance and preserve the Mansion. She was responsible for computerizing  the Mansion with a website and an electronic listing of the Mansion's assets. One of her efforts was the restoration of the Newel Post Lady. The original Newel Post figure that had been removed during the Stark renovation could not be found, but an exact replica was found, purchased, wired, and installed, and stands on the Newel Post today. Her efforts were also responsible for the creation and installation of the fountain at the front of the Mansion. This fountain also reflects Mrs. Carnahan's dedication to the cause of children's health and commemorates the Mansion's 125th Anniversary. Mrs. Carnahan has authored a number of books, two of which are about the Missouri Governor's Mansion and its traditions of hospitality: If Walls Could Talk and Christmas at the Mansion, Its Memories and Menus. Governor and Mrs. Carnahan resided in Rolla, Missouri, prior to his election. They had four children: Russ, Robin, Tom, and Rusty. Governor Carnahan and his son Rusty were killed in a plane crash on October 16, 2000, before the end of the Governor's term. Mrs. Carnahan was appointed to the Senate to fill the seat of her husband who was posthumously elected to the seat in 2000. She became the first female to represent Missouri in the U.S. Senate. Because of Gov. Carnahan's death, Lt. Governor Roger Wilson and his wife, Pat, then served as Governor and First Lady for 84 days (from October 17, 2000 through January 8, 2001) until Governor Bob Holden and his wife, Lori, moved into the Mansion to start their term in January 2001.