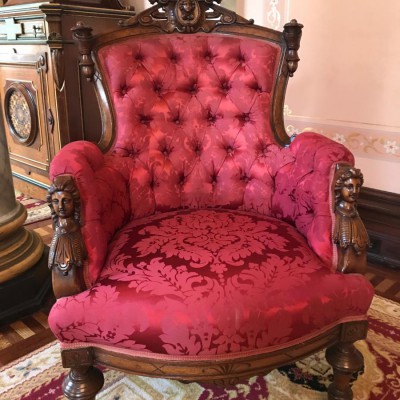 If you have visited the Missouri Governor’s Mansion anytime in the past several decades, you have seen these two suites of red furniture that grace the double parlor on the main floor. John Jellif was one of the nation’s finest furniture makers of the Renaissance Revival period.

There is an eight-piece suite of walnut with the Jenny Lind motif at the crest of the chairs and sofas, along with a female bust at the arms. Jenny, the renowned Swedish opera singer, became popular in the United State in the 1950s after P.T. Barnum persuaded her to come to the United States to perform 93 concerns on tour. The other three-piece suite and an additional matching sofa are made of rosewood rather than walnut but is nearly identical to the Jenny Lind suite.

These suites are currently being rotated out of the Missouri Governor’s Mansion to be completely redone, from preservation of the wood to new upholstery. The first completed pieces returned to the Mansion in December 2017.